The US shale revolution is a hot topic these days. It’s one reason  America recovered faster than Europe following the 2008 global financial crisis. But what is shale gas and shale oil? And what’s all the controversy about?

Hydraulic fracturing, abbreviated to “fracking,” technology is not new. It’s been around since at least the 1920s. It simply got cheaper and easier to do in the last ten years. Basically, instead of drilling multiple wells to extract gas or oil from underground rock formations, water or a mix of chemical lubricants is injected into the ground at very high pressure to shatter or “frack” the surrounding rock and increase yield from the well. This can be done several times at different intervals along the well shaft. The gas then travels up the well shaft and is collected at the surface.

Fracking can also be carried out horizontally as sketched in the diagram below. Rather than drilling several vertical wells down into the same shale rock layer, the well turns a corner and follows the hydrocarbon producing rock. 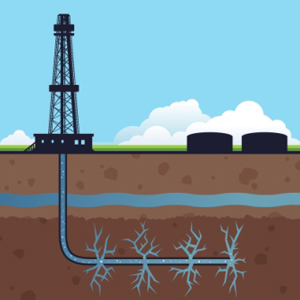 Shale gas is the same organic compound we refer to when we say natural gas – primarily methane. Shale actually refers to the porous rock within which gas is trapped. Generally shale, but sometimes sandstone. It’s like a solid sponge which shatters under the high-pressure injections of water and releases gas.

The most profitable shale “plays” (industry-speak for a geological area containing underground shale gas reserves) are described as “wet” because they also contain crude oil. This liquid hydrocarbon is called shale oil or light, tight oil being trapped in the porous rock and very high quality crude.  [i]

Small and medium-sized producers began fracking in the United States several years ago. Enormous shale plays were discovered in Pennsylvania (Marcellus), Texas (Eagle Ford), and North Dakota, Montana (Bakken). All very profitable whilst international oil prices were high. Since the US gas pipeline network is so well developed it was easy to market the associated natural gas.

The gas market was flooded with diverse new supplies – decreasing gas prices at physical trading hubs substantially. This was a huge boon for industry. Cheaper energy has made US exporters more competitive whilst Europe continues to struggle with higher gas prices and economic recession.

It was heralded as a golden age of gas. This was good news for US greenhouse gas emissions too. Emissions have decreased since gas became more competitive with cheap, but polluting coal in the electricity sector. Additionally, some fuel-switching has occurred with natural gas replacing petrol in a limited number of cases in the transportation sector. This is no small achievement. The US transportation sector is overwhelmingly the greatest source of greenhouse gas emissions in the world.

Could the shale gas revolution happen in Europe?

Two factors allowed US production to take off the way it did. Firstly, in the United States mineral wealth is privately owned. Meaning whatever you dig up and find in the subsoil beneath your property belongs to you. This is why we have the stereotype of a Texan oil baron. A lucky farmer that strikes oil on his ranch keeps one hundred percent of the profits. (Best practice is to hide your find from your neighbours for as long as possible, lest they get digging as well).

In Europe governments retain mineral and mining rights. There is much less incentive for small-time producers to drill for hydrocarbons outside of the United States. Despite your capital investment, the profitability of the project is unpredictable.

Second, the industry was almost completely unregulated when it got started. The wells were already pumping gas and turning a profit before proper regulatory oversight came into play.

Fracking companies have been targeted with accusations of poisoning aquifers. Aquifers are a subsoil layer that must be drilled through to reach shale rock formations below. This is also referred to as groundwater – frequently a natural source of water for rural and urban communities.

There have been cases of the chemicals used during fracking processes leaking into the groundwater in parts of America. Very toxic lubricants were used to make the wells more productive in the early days. Nowadays shale gas producers are willingly reporting the chemicals they are using, (previously considered a commercial secret,) to try and regain the American public’s confidence. And a properly reinforced well should not be leaking into an aquifer for any reason. It’s eventually been made harder for frackers to get the right permits to go ahead with new projects.

Proper geological imaging to ensure wells are drilled far from sensitive fault lines, as small earth tremors have been linked to fracking processes, and regulations regarding water use in drought-prone areas have emerged too.

There are shale basins in Europe, notably in France, Poland and the UK, quite close to dense population centres. If proper regulation oversees the production process chemical leakage and earth tremors are totally avoidable. Nevertheless, the conditions that shaped a shale gas revolution in America are still unlikely materialise in Europe.

[i] This should not be confused with oil shale, which is kerogen. Kerogen rock needs to be heated up to extract crude oil. This is a very different and more expensive industrial process.

My last post explained why international oil prices have fallen dramatically during the last six months. This has harmed the profitability of many oil producers.

International oil traders and producing companies have called on the Organisation of Petroleum Exporting Countries (OPEC) to react to the fall in oil prices. Saudi Arabia is the biggest producing country within OPEC and often represents the group. But what can the Saudis do?

To do this OPEC must accept a decrease in total sales volumes and a smaller market share. The burden of cutting back volumes falls predominantly on Saudi Arabia as OPEC’s biggest producer. Saudi Arabia has had experience in the past with cutting supplies whilst other OPEC members “free ride.” Meaning they benefit from an increase in prices without decreasing their sales volumes as agreed.[1]

International producers are effectively asking Saudi Arabia to do them the same favour. Just why would it do so in a competitive market?

For the moment Saudi Arabia has indeed refused to offer anyone any favours. What’s more getting oil out of the ground is very cheap in Saudi Arabia. Its oil wells have some of the lowest “lifting” or production costs in the world. This is what the graph below shows us: 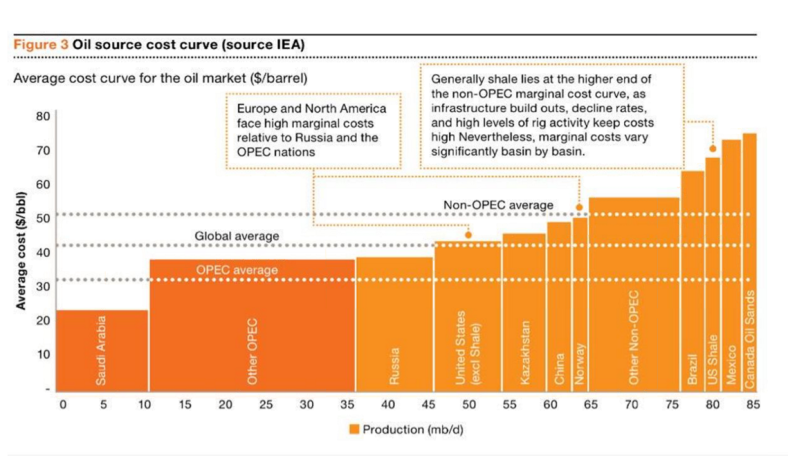 The ultra-polluting Canadian tar sands projects are well out-of-the-money at oil prices of $50/barrel, since it costs $85 to produce a barrel of oil.[2]

The graph also shows us that Saudi Arabia can remain profitable close to $20/barrel. It could let current prices keep falling without sacrificing market share. Today’s oil price is less of a problem for Saudi Arabia than other countries where lifting costs are higher.

Yet, it is unlikely Saudi Arabia will let prices fall that far. Profits from oil sales directly support the Saudi government’s budget. Also, higher prices eventually become more important than sales volumes as profit margins tighten. For example, if I sell ten barrels at $100 each this is the same as selling a hundred at $10 each. Except that if it cost me $9 to produce each barrel my total profit is $910 in the first scenario and only $100 in the second scenario.

For now Saudi Arabia appears content to keep the price low and wait for US shale oil producers with thinning profit margins to leave the market. This strategy will cause the US shale oil revolution to lose pace and protect Saudi Arabia’s market share in the long term. However, we might see OPEC revise their policy later in 2015.

[1] It’s hard to measure exact output and countries report their own production volumes.

[2] I’ll write about the economic feasibility of the tar sands projects soon.